PRECAUTIONS: Warning: Do not use Basil during pregnancy, can be a skin irritant 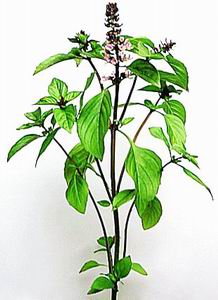 AROMA: It has a sweet liquorice-like fragrance.

PRECAUTIONS: Warning: Do not use Basil during pregnancy, can be a skin irritant.

Emotions/Mind: uplifting, stimulates the adrenal cortex, clears the head, improves memory and helps in concentration, sharpens the senses. soothes fears, helps to combat anxiety, depression, insomnia. according to mailhebiau, “it rebalances those who use their intellect a lot and are mentally exhausted”. according V. A. Worwood, it is useful in the treatment of addictions and helps to overcome the fear of intimacy.

Other: scares off mosquitoes and other insects, used to treat wasp bites. increases the secretion of milk. dr valnet recommends it for epilepsy. it is said to restore lost sense of smell. used for headaches and earaches.

Caution: best avoided in pregnancy. may be hypnotic in high doses.

The Basil plant (Ocymum basilicum) takes its name from the Greek word for a king – ‘basileum’, possibly because the plant was so highly prized that it was considered a King among plants, or maybe because it was an ingredient of an oil for anointing kings. Sir John Parkinson in his herbal says ‘The smell thereof is so excellent that it is fit for a king’s house’. The plant is still greatly valued in present-day Greece, both for cooking and as a medicinal herb, and has various popular names, such as ‘Joy of the Mountains’ and ‘Boy’s Joy’. Pots of it may be found placed at the foot of the pulpit in Greek churches.

The plant grows wild all over the Mediterranean, especially on sunny hillsides, and there are a number of varieties, varying in height, colour of leaves, etc. The leaves may be a very dark green, or may be lighter and hairy, narrow or straight. The scent also varies, in some cases resembling FENNEL or Tarragon, but the variety used in aromatherapy has pale pink flowers, hairy oval leaves and its own characteristic scent which is a little like that of thyme, but hotter and more spicy. Although the plant has naturalised in the Mediterranean and many other parts of Europe, it is a native of Asia, and has a long history of use in Indian traditional medicine.

The essential oil is yellowish, and its active principles include methylchavicol (40% to 50%) with linalol, cineol, eugenol, pinene and CAMPHOR.

Basil has been used since antiquity for chest infections, digestive problems, and jaundice and some writers consider it an aphrodisiac. By the 16th century it was widely used for headaches, migraines and head-colds, being made into a powder and inhaled like snuff to clear the head! We may find inhaling the essential oil a more civilised method, but it is still used for the same problems. It is also an excellent cephalic, second only to Rosemary in its clarifying effect on the brain, so it is good for mental fatigue. It is certainly an oil that can be described as uplifting and one early herbalist said that Basil ‘expels melancholy vapours from the heart’.

Major uses include treating all kinds of respiratory infections, including BRONCHITIS and WHOOPING COUGH, and many feverish conditions. It is also antispasmodic, and massage over the stomach with Basil will ease many digestive difficulties. It can be used, again in gentle massage over the abdomen, to assist scanty and painful periods.

As a massage oil, Basil may perhaps not be a popular choice used alone, but blends well with other oils, especially LAVENDER, and is very good for tired, tight, overworked muscles. It is especially good for athletes, dancers and other people engaged In strenuous physical activities.

Some lesser, but welcome uses include COMPRESSES to reduce engorgement of the breasts, and as a mouthwash which is very effective for mouth ulcers and gum infections. Basil is a generally tonic and stimulating oil, but if used to excess has the opposite effect. When used in the bath, it makes the skin tingle, and could be irritant to people with sensitive skins. Used in dilution it is good for the skin, and improves the tone and appearance.

Be the first to review “Basil 10ml” Cancel reply